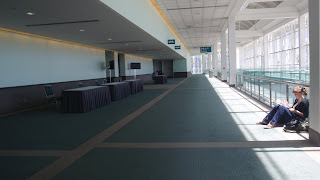 First ones there! lol Actually we were only two hours early :/ If even that.
Anyway...
CGCON is awesome! Really enjoying the lectures soo far :D Scott Robertson: this guy is awesome! Gave a great lecture on reflection and lighting :D SteamBot: Two of the Four concept artists involved in this studio. These guys are hilarious!!!
Totally learn great techinques on how to paint with real photos, brushes, and collaborating with a fellow artist :D More pictures from the SteamBot lecture The Mighty Ryan Church!!!
This guy is fun! Love listening to him speak. Really was honest about the industry. Gave a great lession on his process of painting. Starting with basic sketches of an idea to modeling that idea in 3D, making a render of it. Then finally putting that render back into photoshop and painting over it. Painting with NO LIGHT. Which is just lowly adding the lighting in. Really awesome! Mark Goerner: This guy had a LOT of information! Really in-depth, glad he'll be back tomorrow
Had good points about when you start painting. Talk about Composition and the POV, Mood, Story, Genere and much more! Edgar and I got our picture taken with Ryan Church! :D Then got pictures with the guys :D Last day is tomorrow. Then Sunday I leave for San Diego!!!
Posted by Clever Blue at 9:57 PM