Wow lots going on this month, but not only with me. There’s some new events coming up that I only just found out about this morning! Well, first off I’ll just start with what’s been going on with me. I got my buddy Alica a temp. job at Oakley. Which is just awesome, I have soo much fun working with her. I think she’s staying for about three weeks. Hopefully I can get her to post the comics she’s already been drawing of her days at Oakley. They’re funny as hell!

Overall work has been great, and I’ve been picking up some freelance along the way. When I’m allowed I’ll post some of it.

Comic-con is just around the corner. I have to say I'm very excited because this year I know what I want to go see and who I want to meet. Last year was more of getting a feel for what Comic-con had to offer. So you can bet now I'll be prepared! :D I'll be going with

this year. Which should be fun, though I hope we don't meet any of her CRAZY fanboys. Just to let you know Etoli, I'm taking a bat just encase! Last year was too close for comfort. haha

One panel I'm looking forward to seeing is the Last Avatar Panel. Here's a comment from Bryan Konietzko, who is one of the creators of the series...

"FOR IMMEDIATE RELEASE: One week after the last 10 episodes will air on Nickelodeon, the "Avatar: The Last Airbender" panel will be at the San Diego Comic Con on Friday evening, July 25, 7:30-9:15pm in one of the (b ig!) 2000 person rooms. Please join co-creators Mike DiMartino and Bryan Konietzko and director Joaquim Dos Santos for a screening of the final chapters 320 & 321 and other fun activities (details to follow shortly on Nick.com and the SDCC website). Friday passes are almost sold out, so please act fast! We really want to see as many fans as possible in the room! On Saturday, Mike and Bryan will do a poster signing (time and details to follow). See you in San Diego!"

Sooo, my ass will be there earlier then 7:30, though I think the 2000 seat room will hold everyone. But I know for sure there will be a line.

On that note, I just found out about an Avatar Contest that Nick is holding.

I guess the contest started on July 9th and ends on the 15th. Doesn't sound like a lot of time. The prize is the top 10 winners will have their work displayed somewhere. And that's it, i think. Sounds kind of thrown together, I think it'd be cool to have the 1st prize winner get a dvd box set of Avatar or some cool poster signed by the co-creators and artists. Oh well.

Another big thing I learned this morning is that master storyteller and Oscar winning film maker Hayao Miyazaki has created a funding raising exhibition auction to support The Auction will be held on September 6th at Pixar Animation Studio Campus.
You can read more about it just click the picture. I have already seen pieces of the art posted on dA. Awesome work. But BOY are they expensive. Mos t of them starting at 1,000 dollars. Hopefully the book they're making will be more within my budget.

Oh, I went to Renfaire with Etoli this year and MAN it was hot. But I had fun, I brought my younger sister along too. Kelli had this awesome outfit, with cool added jewelry. I dressed up too, just added more feathers and wore black. I also let Kelli draw on my face. haha. 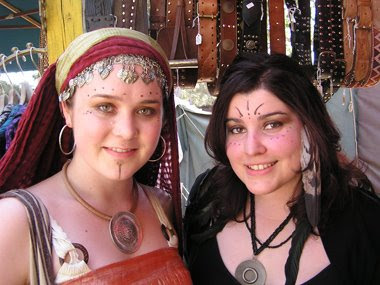 Last month I had my buddies come over to my house to watch some movies. Most of them spent the night since I live an hour away from where they drove from. The next day they went with me to my dad's yard to feed the dogs. Well it was 104 degrees that day-very dry heat. Those poor guys are all coastal beach lovin people, while I am pretty much an earth bender. Water is just not my element. So the heat doesn't bother me too much only because I'm used to it. So it was fun to watch them find shade and adjust to their new environment haha jk jk

Anyway here's a picture we took 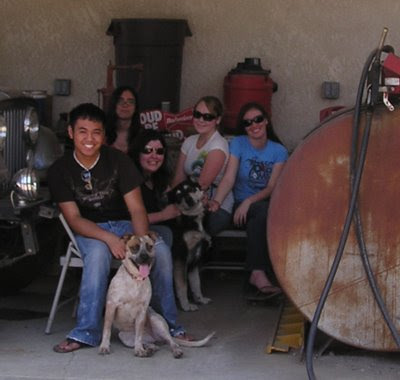