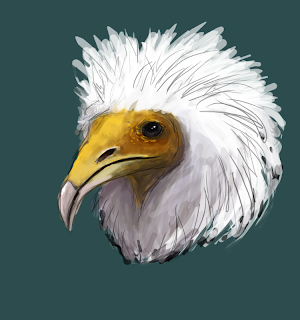 Woohoo!
So far so good. Though this is only my second painting for the birds of prey idea. It's the third post this week. yay.
This bird is one of my favorites it's called an Egyptian Vulture. 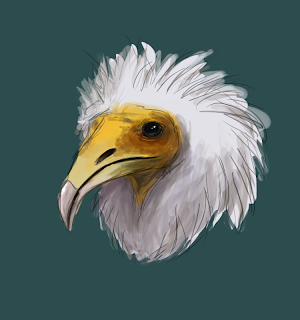 Posted by Clever Blue at 2:17 PM No comments:

Wow, two posts of art in 24 hours. I'm on a roll lol
Since I didn't have anything to do today at work. I figure I'd paint something. I've recently have been clued to blogger sites. I get soo inspired and I just want to make something pretty :D
So I think I've decided to try and do a speed paint of the birds of prey, everyday till I run out on the list that Wikipedia has. I want them to be similar to the one I painted for my banner(which was done two years ago).
So here's my second painting. A Seahawk also know as Osprey.

This one was done in 30 minutes. 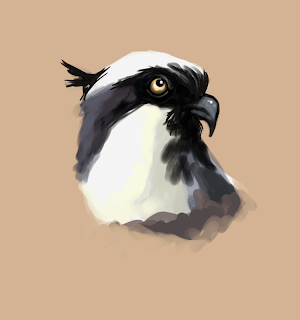 This one had maybe another 20 minutes. 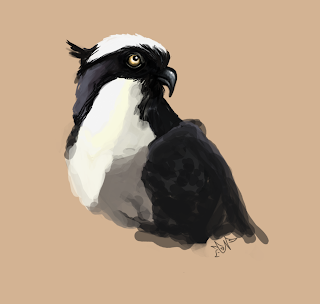 well I hope to be posting tomorrow!!!
Posted by Clever Blue at 2:47 PM 2 comments:

Ah well I haven't really been working on anything other then Oakley work and my sister wedding stuff. This past week I finished my sister's wedding guestbook and her photo montage that will be played at the reception.
Anyway, I got this freelance gig a while back and I've been having trouble finding time to finish it. Luckily there's no dead line on this so, I can take my time with it!
I'm liking how it's turning out, and so does the artist who hired me as his colorist. :)
It's suppose to be depress, I think. I'm just going off with what the script reads. I still have a lot I want to try and do. I know I'll have more time when i move out 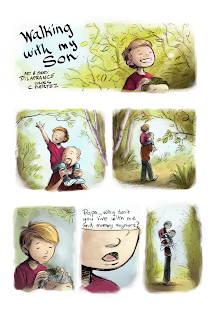 My Trip to Pixar

I've been wanting to post this journal for awhile over at dA. But it's such a pain to post pictures with their system. Blogger makes it so much easier :D
Anyway, I'm sure a lot of artists have heard of the Totoro Forest Project. If you haven't, it was a fund raising auction to save a forest in Japan. It wasn't just any forest, it was the forest Miyazaki used as reference for his film My Neighbor Totoro.
I had heard about the fundraiser from deviantart.com, one of the artist had posted his piece he was contributing to the auction. I followed the link he had in the description and thus stalked the Totoro forest blog lol jk. I actually just kind of blow it off. It wasn't until Kelli and I went to Comic-con San Diego that I really found out more about it. I went over the the OUT of Picture booth and noticed they had this huge poster for TFP. It was there that I met Daisuke “dice” Tsutsumi and Micheal Knapp. Dice was pretty much in charge of the whole fundraiser. Once I found out more about the event I started checking out the site more for updates. It was by chance that I caught it on the day they started selling tickets to the auction. Which was being held at Pixar Studios. I was thinking, "man I wanna go to that." Figured what the hell, why not. Kelli would go with me. So I emailed Kelli asking her if she wanted to go. She called me back and was totally down for the road trip. When we pressed refresh on the website the $100 dollars tickets were sold out. The ones left were the $200/300/and $500. I was like "WTF!!!" The tickets were selling fast so Kelli and I were both like fuck it, when is something like this ever gonna come up again. So w
e each bought our tickets. Everything was sold out within two days.

Kelli and I made our 7 hour drive to San Francisco, well I drove she slept.>/
The drive wasn't that bad, it was the actual driving in San Fran with the whole one way streets that made it bad. One way streets are fuckin stupid, whoever design that city should be slapped. I drove against traffic twice, well the second time I caught myself. But DAMN, did that city stress me out. Anyway, we did some site seeing to kill time before we had to get ready for the auction. When we got there it was like walking into scenes of the different pixar movies. It was really awesome.

Pixar is huge, i think it's 6 arcs and they are still expanding. Kelli and I were totally lost. Everyone seemed to know everyone. We were just two girls who happened to find out about it. I saw John Lasseter, he was the only one I recognized. (his back is facing me)

The event was really awesome and something I'm very glad I was able to be a part of. Kelli and I ended up meeting the head of HR and the head of PR for Pixar. I picked a table they were sitting at and started chatting with them. :D Very nice women.
Well I think I've said enough. It was fun, probably the only chance I'll ever get into Pixar lol
Here's some more pictures!!!

Oh and I was able to get a print and two Totoro Forest books. I can't believe how rare these books are now. I also can't believe how some greedy bitches are selling it for over 100 dollars. :sigh: oh well. The auction was a huge success.

Here's a quote from Dice...

"What a memorable night it was.. I don’t even know how to begin..

This was almost surreal. At least I personally felt numb the whole time. Quite an all star line up of artists coming all the way from LA, NY, Japan, France, Canada, and England… And lots of familiar faces from Blue Sky, Disney, Dreamworks, Lucasfilm, and Sony Picture Animations.

Many people did not imagine this was set up so beautifully. Food was great. Lots of great drinks like Sake and plum wines.. and of course.. ART WAS FANTASTIC!

We sold all 205 pieces of art work donated for this project. We made over $200,000 which actually was twice as much as we were shooting for. The energy was insane. A full of spirit of human generosity. People were really excited. People were really happy."
Posted by Clever Blue at 9:44 PM No comments: